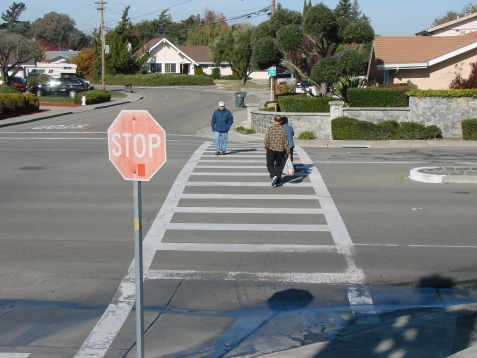 Perseverance and Dedication: After Years of Litigation, Including a Three Week Trial and Subsequent Appeal, WHK Reaches Settlement on Behalf of Profoundly Brain Damaged Client

On January 9, 2008, our client, then 58-years-old, was pulling her two-year-old grandson in a wagon across Alcosta Boulevard, a major artery in the City of San Ramon, when she was hit by an automobile driven by a teenaged motorist. She was in a marked crosswalk at the time of the collision. While her grandson’s injuries were limited to a broken collar bone, she suffered a catastrophic brain injury and now requires around-the-clock care.

The attorneys at Walker, Hamilton & Koenig, LLP, filed a lawsuit in August 2008 on behalf of our mentally incompetent client, her husband, and her grandson, against the teenaged driver, alleging negligence, and against the City of San Ramon, charging it with liability for a dangerous condition of public property.

The City attempted at various stages to defeat the case based on governmental immunities and the testimony of witnesses who never saw the client look to the left or right as she crossed the street. After two years of litigation and extensive law and motion, in August 2010, our team, led by founding partner, Walter (“Skip”) Walker, III, was forced to try the case in Contra Costa County. But, after three weeks of testimony and closing arguments, and while the jurors were waiting to be instructed, the court inexplicably determined that the City was immune from liability based on documents that had not been produced until trial.

In December 2010, we filed an appeal, arguing that the trial court improperly took the case away from the jury. The First District Court of Appeal agreed, and, in August 2012, reversed the trial court’s judgment and remanded for a second trial. (The Court of Appeal’s opinion can be read HERE.)

With a September 2014 trial date pending, the attorneys at Walker, Hamilton & Koenig, LLP, negotiated a difficult settlement with the City of San Ramon for $800,000. (We had previously settled for the $50,000 policy limits of the teenaged motorist.) As part of the settlement, the City will install in-roadway flashing lights or similar pedestrian safety enhancement at the subject crosswalk. In addition, a Special Needs Trust has been established to pay for our client’s medical care for the remainder of her life.